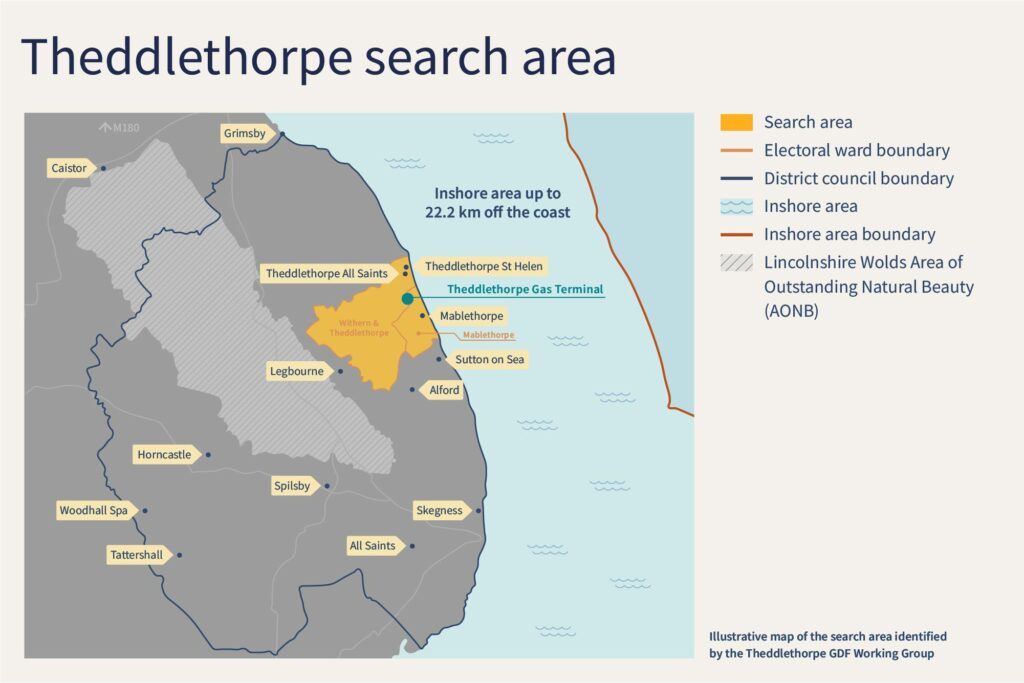 The Theddlethorpe GDF Working Group has today identified a Search Area for further consideration in the search for a suitable site to host a Geological Disposal Facility (GDF).

A GDF is an underground facility designed to safely and securely dispose of higher activity radioactive waste. It also includes a surface facility of around one square kilometre where waste would arrive before being transported deep underground.

The Search Area has to be based on district electoral ward boundaries and the area announced today covers two district council electoral wards, Withern & Theddlethorpe, and Mablethorpe.

The former gas terminal site in Theddlethorpe remains a key focus area for the GDF surface facilities. The deep geology under the inshore area (beyond the coast) will be considered for the underground part of a GDF.

The ward of Mablethorpe has been included because it is so close to the boundary of the gas terminal site and the potential to locate some facilities, such as offices or training facilities at other locations, including Mablethorpe.

Jon Collins, Independent Chair of the Theddlethorpe GDF Working Group, said: “The Working Group looked at readily available information on things like local geology, environmental issues, transport, and safety. We also listened to the views expressed locally, including at the face-to-face events we ran last year.

“If we move to the next stage of the process, this information and the two wards we’ve identified give us a sensible starting point to begin the work of a Community Partnership, should one be formed.

“It’s important to stress that no decision has been made on whether a GDF will be built in this area, and this is only the beginning of a long conversation over many years about what’s right for the area”.

In the next couple of weeks, local residents will receive a letter from the Working Group explaining how the Search Area was identified and also details of how to find out more, including a programme of events which will begin on 4th March. Details of events are here.

Kieran Somers, Siting Manager for the GDF developer, added: “We have evaluated the Working Group’s Search Area proposal and concluded that the electoral wards of Withern & Theddlethorpe and Mablethorpe, including the deep geology under the inshore area (beyond the coast), do have the potential to accommodate a GDF deep underground, and the infrastructure needed on the surface.

“It’s also important to point out that a future Community Partnership could change the Search Area as proposals develop in more detail, for example, if new infrastructure like roads or a rail link were needed”, he added.

A surface facility, which would be the entry point for a GDF, would require up to one square kilometre of land and suitable transport links. The underground part is likely to need anywhere between 10-20 square kilometres of suitable geology at an appropriate depth.

At that point, the Search Area will be eligible to benefit from £1m per year in Community Investment Funding for projects, schemes and initiatives that improve the local area. If investigations progress to the point at which boreholes are drilled (to better understand the deep geology), funding would increase to £2.5m per year. Again, to be spent on projects within the area.

The process of finding a site is likely to take many years and other areas of England, including west Cumbria, are also being considered. A GDF will only be built in Lincolnshire if there is a willing host community and a suitable site which can be shown to be safe. If the community doesn’t want it, it won’t be built.